While most motorsports events worldwide were canceled due to coronavirus precautions, the Vintage and Historic Raceboat Regatta in Tavares, Florida, soldiered on. Under sunny skies and on calm waters, some of the most impressive and iconic race hulls from years gone by strutted their stuff impressively on Lake Dora on March 14-15.

The Florida Vintage Race Boat Club reported the largest turnout in its history of both participants and spectators. The town fathers in Tavares voted on Friday to let the event go on since so many folks had already arrived and checked in, some from significant distances in both the United States and Canada. Know as the “Seaplane Capital of the U.S.,”Tavares has been very cooperative and proactive in supporting many vintage raceboat events over the years. The town also puts on Aqua Cross events with Powerboat P1, as well as numerous fishing tournaments and other lake-related activities and festivals.

With almost 60 boats to launch and retrieve multiple times, the officials and pit workers were kept hopping for two days and more. The one-mile course— set to APBA standards— was in place by Friday evening and it proved ideal in allowing the inboard and outboard hydros, V-bottoms, flat-bottoms, speed skiffs, wings and tunnel hulls to showcase their performance without exceeding a safe-but-impressive speed envelope.

Vintage and historic boats put on demonstration heats that emulate race scenarios but are not engaged in actual racing competition. Many drivers have long and distinguished racing backgrounds, while others are fans and collectors of the older racing hardware. The referee assures that all boats are under control in a safe, yet entertaining manner.

A number of past American Power Boat Association champions present included Beale Tilton, Bill Edwards, Rayner Blair, Bob “Pappy” Moore, Mark Wheeler and Larry Lauterbach, a man who is always mentioned in the conversation regarding the greatest hydro drivers of all time.

Lauterbach also brought two brand new reproduction Grand Prix hydros from his family’s legendary shop in Virginia. Both boats featuring big power. The pits were also stocked with many other Lauterbach hulls dating back more than 60 years, including the amazing Miss U.S. Unlimited Hydro featuring a 12-cylinder Rolls-Royce Merlin engine. But the single most impressive run of the weekend was turned in by the huge Staudacher-inspired Grand Prix hydro, Concordia, from Quebec.

Also in attendance were some folks from offshore racing, including perennial Class One world champion Steve Curtis, as well as Azam Rangoonwala and Michelle Petro from P1, who enjoyed the event. Steve is restoring his dad’s first outboard marathon race boat dubbed Hummingbird, a 15-foot Cougar V-hull with a 1968 Evinrude X115 outboard engine. He hopes to bring it to a future event. The only mishap of the weekend occured with the newly restored Miller American Caldwell/Adams Mod-U outboard tunnel hull. A trim malfunction caused it to lift off the water and flip while decelerating, ejecting owner/driver, Jeff Kent, who was uninjured.

Based on the weekend’s turnout and the number of other Vintage race boats currently in various stages of restoration, the FVRC is working with the city of Tavares to expand the pit area for future events. Those of you who currently race in various APBA categories can take comfort in the fact that after your “10/10ths” racing career is over, you can come and play with us in V&H and stay on the race course. 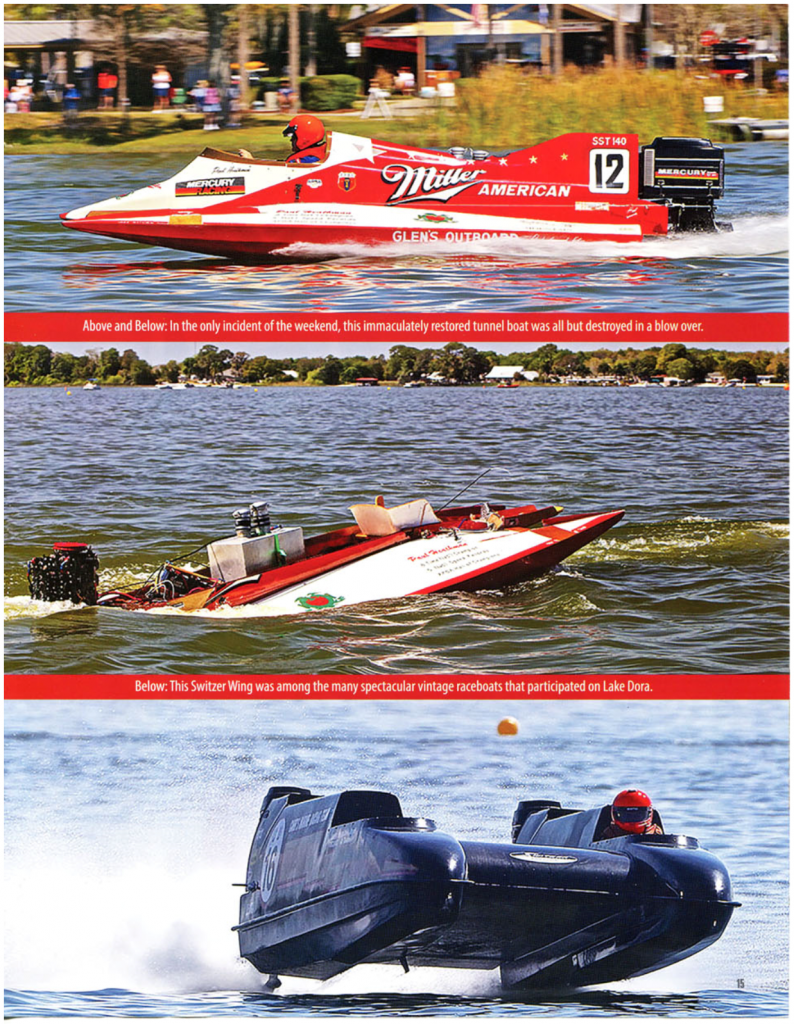